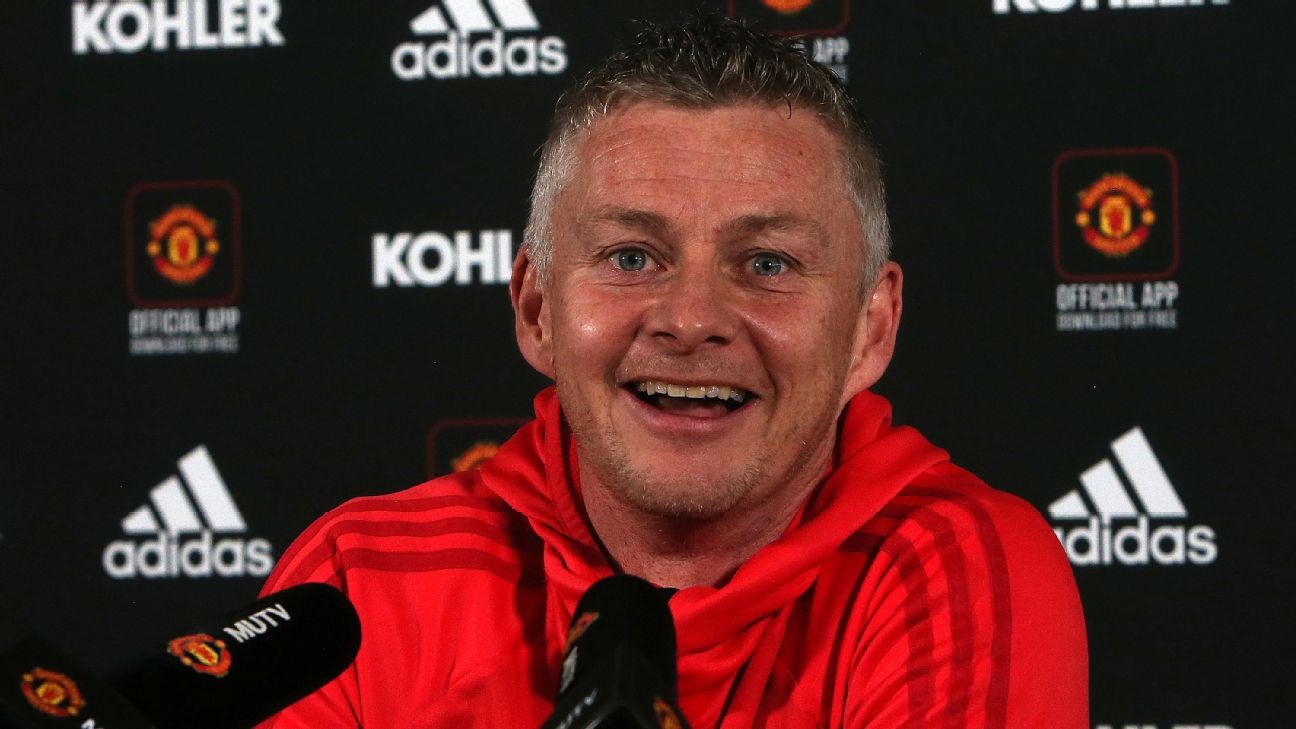 The transfer window for Europe's biggest clubs is closed, but click here for all the deals. Transfer Talk will continue to scour the world's media and set correspondents loose to see what's on the agenda for the summer.

Ole Gunnar Solskjaer's agent has returned to England as Manchester United continue to discuss the possibility of the Norwegian becoming the club's next permanent manager, sources have told ESPN FC.

Jim Solbakken, Solskjaer's long-time representative, was in the UK over the weekend before returning on Wednesday. Solskjaer has also returned to Manchester after spending time with his family in Norway during the international break.

Solskjaer is leading the race to be named manager on a full-time basis after a successful caretaker stint, but the club have so far remained tight-lipped about their plans. The 46-year-old could be installed as permanent boss as early as this week, but sources have told ESPN FC that United are in no rush to make an official announcement.

It appears that Solskjaer's first move as full-time boss would be to state that Paul Pogba and Marcus Rashford are not for sale, even if keeping Pogba scuppers any potential move for Gareth Bale, according to the Telegraph.

Pogba was linked with a move away from Old Trafford during the first half of the season when he fell out with Jose Mourinho. The Frenchman even recently suggested it would be a dream to join Real Madrid and play under Zinedine Zidane. However, Pogba has been a key part of United's change in fortunes under Solskjaer, and the Norwegian has said that Pogba remains a key part of his plans for next season.

Despite what the Telegraph says, Tuttopsort are reporting that Pogba's agent is demanding a huge pay rise and a move to Madrid for his client.

Rashford also has been linked with Madrid (and Barcelona, although a source says the Catalans see that as about as likely as dating a supermodel), but Solskjaer is keen to tie the young striker down. The club are said to be in talks with Rashford over a long-term deal.

With help from former Tottenham and Liverpool director of football Damien Comolli, we show you a step-by-step guide to a transfer.

FIFA have banned Chelsea for a period of two transfer windows. But what did they do wrong and how will the punishment play out?

12.05 GMT: Manchester United and Ander Herrera are facing a race against time to find an agreement to keep the midfielder at Old Trafford beyond the end of the season, sources have told ESPN FC. Both parties are keen to agree a new contract that would see the Spain international stay at United but, according to sources, there is still a significant gap to be bridged before a deal is sealed.

Sources have told ESPN FC that Paris Saint-Germain, Arsenal, Juventus, Inter Milan and Barcelona are among the clubs ready to sign the 29-year-old on a free transfer if fresh terms are not agreed. If the stand-off continues, he will officially become a free agent on June 30.

Herrera would like to remain at United but so far the club, who also want him to stay, have refused to meet his demands and a compromise is yet to be found. There is a willingness of both sides to come to an agreement but there is also an acknowledgement that the clock is ticking and Herrera may soon be forced to seriously consider other options -- especially with some of Europe's biggest clubs circling.

11.10 GMT: Bayer Leverkusen's 19-year-old midfielder Kai Havertz is on his way to following in Michael Ballack's footsteps. The club's youngest top-flight goal scorer has already become Leverkusen's life insurance, clocking up 21 goals and a further 25 assists in 97 competitive appearances for the Bundesliga side.

However, his time at the Bay-Arena will come to an end at some point and top clubs are lining up for the Germany international. On Wednesday, Sport Bild reported that German powerhouse Bayern Munich are leading the race for Havertz with Real Madrid, Barcelona, Manchester City and Chelsea reportedly also keen on his signature.

Under contract at Leverkusen until 2022, Bayern are willing to spend €75m on Havertz in 2020, with Bayer not wanting to let go of their star player just now. But Leverkusen are seeking a transfer fee in the €100m region, Sport Bild claims. When contacted by ESPN, Havertz's representatives said they are "not commenting on speculation."

10.15 GMT: Barcelona remain optimistic of landing Ajax's Matthijs de Ligt but haven't moved any closer to signing him while in Amsterdam this week.

Club president Josep Maria Bartomeu took CEO Oscar Grau with him to the Dutch city for the ECA general assembly with the aim of also talking numbers with Ajax.

However, sources say there have been no major strides taken towards completing a deal for De Ligt in the past few days, but the Catalans are still confident of signing the young centre-back.

Alaba, 26, has become a key player for the German giants since making his debut for them in 2010, not least because of his versatility.

He is able to perform at a high level in central midfield or in the heart of the defence as well as his usual left-back position.

Alaba's contract with the reigning Bundesliga champions runs until 2021 but, with Bayern linked with a move for Atletico Madrid's Lucas Hernandez, this summer could be the time for him to make a move.

08.00 GMT: Paris Saint-Germain want to sign Benfica starlet Florentino for the 2019-20 season, according to Record.

PSG have monitored the 19-year-old this season, in which he has made four league appearances for Benfica and 20 league starts for Benfica's reserves.

According to Record, the French giants have already approached Florentino's agent, Bruno Carvalho, with a view to negotiate his transfer this summer.

Florentino, a Portugal U20 player, is tied to Benfica until 2023 and has a €60m release clause.

PAPER TALK (by Nick Judd): Mkhitaryan and Ozil out, Barella in?

Arsenal boss Unai Emery is reportedly looking to sell Henrikh Mkhitaryan in order to free up spending money for new players this summer, says the Mirror, and Mesut Ozil also could be on his way out, with Arsenal reportedly keen to offload their biggest earners.

Emery was restricted to loan signings in the January transfer window and could start the summer transfer window with only a small fund if Arsenal fail to finish in the top four. However, with Aaron Ramsey gone and Petr Cech retiring and a number of stars reported to be on their way out, including Danny Welbeck, Emery hopes to have enough money to make four new signings.

One of those targets, according to the Mirror, is Italy star Nicolo Barella. The Cagliari midfielder is seen as the ideal replacement for Juventus-bound Ramsey, but any deal for the 22-year-old could depend on whether Arsenal will be playing Champions League football next season.

- Everyone wants Kylian Mbappe, including Real Madrid. The Sun reports that the Frenchman's father is in constant contact with Los Blancos, though the player himself has said he would like to win the Champions League with PSG before he departs. He could be in the French capital for some time then.

- The future of Mario Mandzukic is set to become a lot clearer in the next 48 hours, with Calciomercato reporting that the striker is set to stay at Juventus. They seem pretty confident that an official announcement will be made soon.