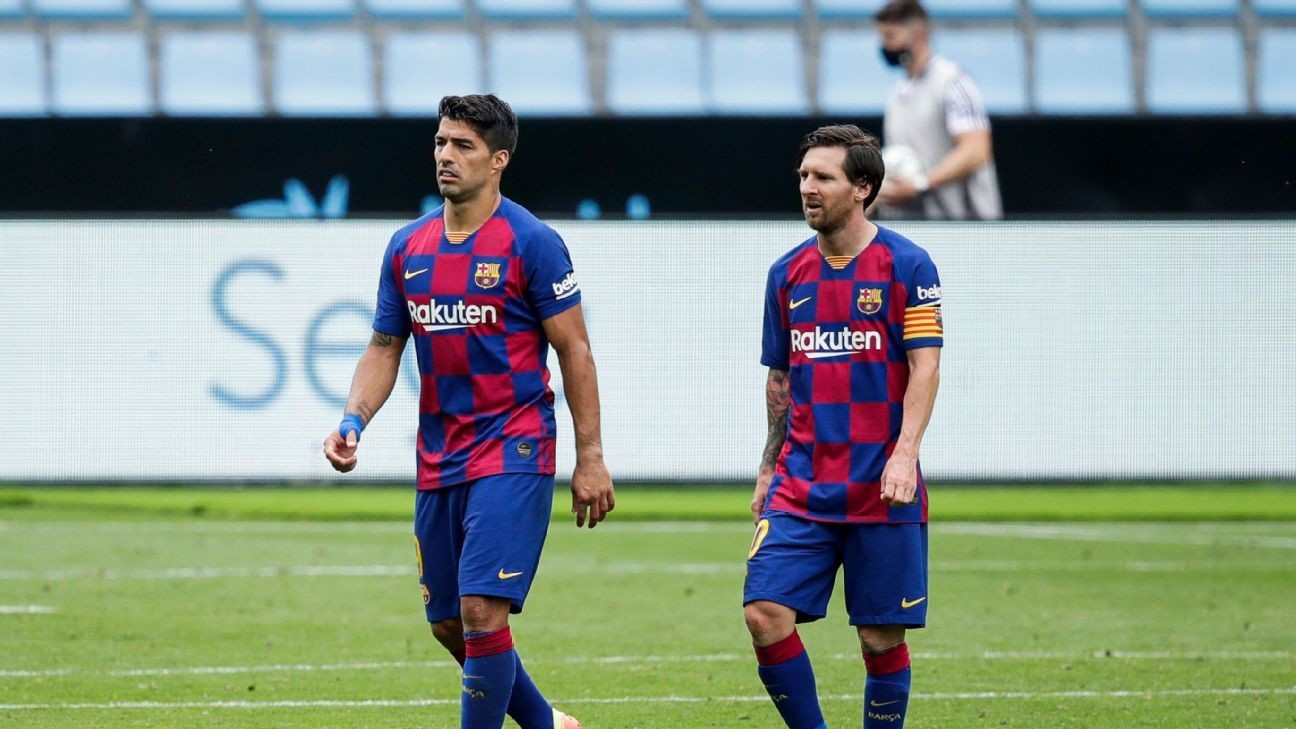 Lionel Messi has launched another scathing attack against Barcelona's board, accusing them of disrespecting Luis Suarez and effectively kicking him out of the club.

Suarez, 33, had said he wanted to stay at Barca this season, even if it meant taking on a backup role, but eventually agreed to leave after being told by new coach Ronald Koeman he was not part of his plans.

- Stream ESPN FC Daily on ESPN+ (U.S. only)
- Lowe: Messi gearing up for "Last Dance" with Barca
- Inside story: How it went wrong for Messi at Barca

Barca announced on Wednesday they had agreed on a deal to transfer him to La Liga rivals Atletico Madrid, removing Messi's best friend from the dressing room in the process and further isolating their star player.

"It will be strange to see you in another shirt and even stranger to play against you," Messi wrote on Instagram on Friday, a day after he bid farewell to Suarez in a farewell event at Camp Nou.

"You deserved to depart for who you are: one of the most important players in the club's history, winning things as part of a group and individually. Not for them to kick you out as they have done. But the truth is nothing surprises me anymore."

Messi's comments are further evidence of the relationship breakdown between the forward and president Josep Maria Bartomeu which led him to try and quit the club in August.

Messi decided to stay and said he did not want to take the club he loves to court over a clause in his contract his legal team believed meant he could leave for free.

However, several of Messi's closest allies at the club have left, including Suarez and Arturo Vidal.

"How hard it'll be not to share each day with you, both on and off the pitch," Messi added on Instagram.

"We're going to miss you so much. So many years, so many mates [a South American caffeine-based drink], dinners... So many things that will never be forgotten, every day together. I wish you all the best in this new challenge."

Messi first aired his grievances with those running the club when he took to Instagram in February to call out former sporting director Eric Abidal, who had blamed the players for ex-coach Ernesto Valverde's dismissal.

During the lockdown caused by the COVID-19 pandemic, Messi and his teammates complained of leaks at the club as they negotiated a pay cut to help Barca cope with the effects of the pandemic.

Finally, after failing to engineer a departure this summer, Messi was critical of Bartomeu and the board in an interview with Goal earlier this month when he announced he would be remaining at Camp Nou until at least 2021, when his existing contract expires.

The Argentina international accused Bartomeu of lying to him and said it had been years since the club had a proper project, saying they were "juggling things and plugging holes as things go by."