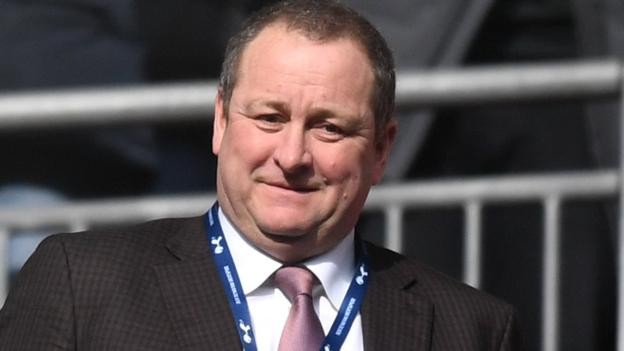 Newcastle are currently 13th in the Premier League

Newcastle United owner Mike Ashley has been criticised by fans after a number of supporters were charged for their next season ticket, despite the ongoing suspension to the Premier League.

Newcastle United Supporters Trust (NUST) had called on the club to suspend the scheduled payments "during this incredibly difficult time".

Some fans were charged £620 on Wednesday, they said, describing the situation as "incredibly disturbing".

The Premier League is currently postponed until 30 April at the earliest due to the coronavirus outbreak.

A statement from NUST claimed talks were held with the club on the subject this week.

"Newcastle United contacted us earlier today," NUST said. "The club stated it has no intention of freezing or delaying payments, both for those that pay annually and monthly.

"Newcastle United can still act now and provide much needed support and relief for their fans that are in financial difficulty due to this global emergency."

It is understood the supporters affected were warned in advance that payment would be taken, and that it was the usual payment schedule for those who are on the long-term, price-freeze package.

However some Premier League clubs including Brighton, have offered "payment holidays" for season ticket holders in order to ease the financial burden on their fans.

Newcastle fan Thomas Concannon, who has held a season ticket at St James' Park for more than 20 years, told BBC Sport: "As a self employed person who is currently suddenly out of work due to the coronavirus crisis, the weeks and months ahead are likely to be extremely difficult.

"The thought of having to cancel my season ticket is devastating. I merely want the club to understand the situation of fans that really need help during this time."