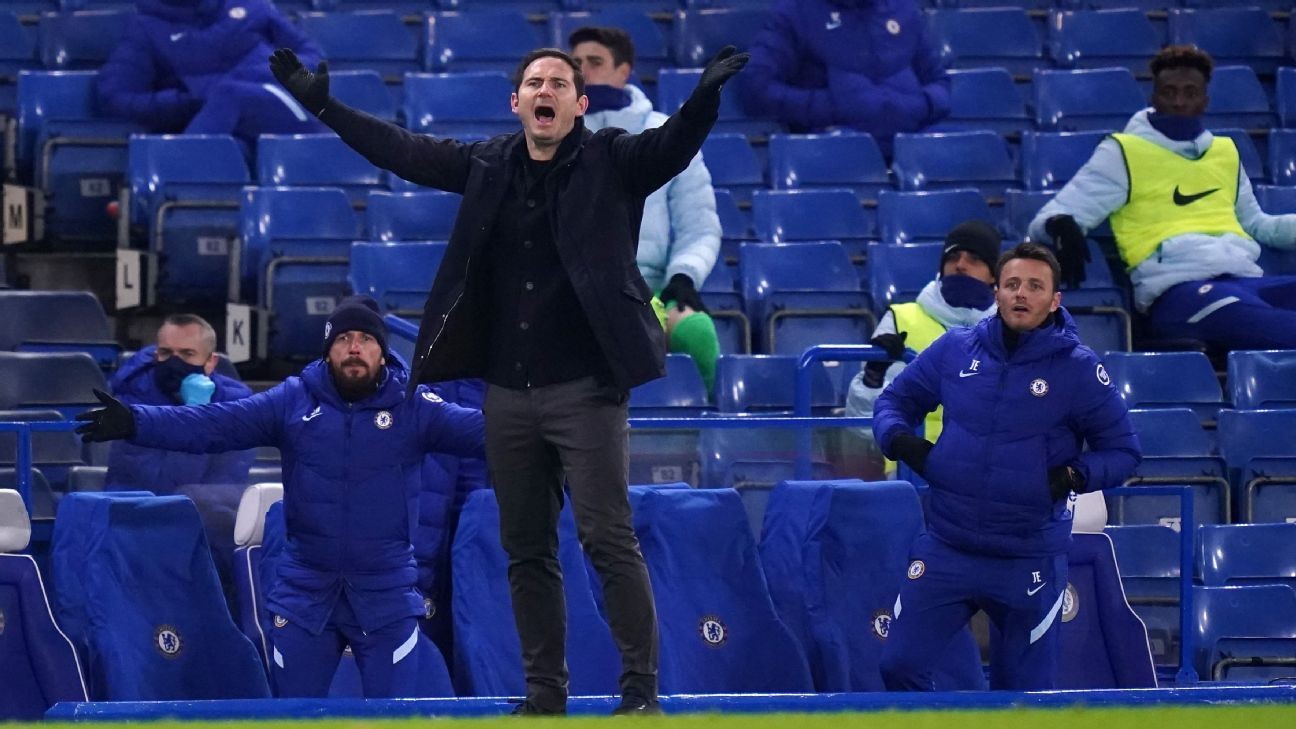 While Chelsea were far better against Aston Villa than in their limp 3-1 defeat at Arsenal, the football world is still waiting for Frank Lampard's side to return to top form.

Monday's 1-1 draw was not the result Chelsea wanted, or needed, to get their season back on track. Instead, things are stuck in a vicious cycle of wondering whether Lampard knows his best XI or, equally pressing, whether or not he knows how to get the best out of them. They answered his pre-match rallying cry of improving their intensity, but the balance of matches is not yet falling in their favour, with just one win in their last six games (all competitions) to show for it.

Chelsea spent big in the summer in order to build upon last season's promise and contend for the title; heading into the new year, that £220m figure is now an albatross around Lampard's neck. This is not to do Aston Villa a disservice -- they're a brilliantly organised team and put their remarkable work rate to good use at Stamford Bridge -- but Chelsea needed to win this match at home after three defeats in four, ultimately falling short.

"When you're in a tough moment, things don't quite go for you -- you have to fight through it," Lampard said post-match.

This was Chelsea's second match in 48 hours; the festive schedule is bruising and unrelenting, and as it's being played out against the backdrop of COVID-19 logistics and stress, you can forgive players for the odd off-day. But Aston Villa are enduring the same circumstances and while Chelsea made six changes from the Boxing Day defeat at Arsenal, Villa made just one suspension-enforced change.

You could see two different approaches in play on Monday night: Dean Smith, doing a brilliant job at Villa, is content in knowing his best team and sticking with them, backing them to play through the fatigue and deliver. Lampard's squad is a bigger beast with a lot more options, but is lacking consistency. "Mentality" was the buzzword post-match, but that won't win you titles alone. And so it was the old tried and tested that got Chelsea the point.

Lampard has yet to figure out the right formula for his expensive Chelsea side. Time's running out given the hectic fixture list and pressure to get results. John Walton - Pool/Getty Images

Take the always reliable Olivier Giroud, who delivered again for Chelsea in a moment of need. His clever header gave Chelsea the first-half lead, with Ben Chilwell superb and both wingers Christian Pulisic and Callum Hudson-Odoi lively. Pulisic had two good first-half chances while Timo Werner, dropped to the bench, fired over the bar late on and Chilwell flashed a last-gasp, beautiful volley just wide of Emiliano Martinez's far post, but the Frenchman is their dominant presence through the middle of the field.

Chelsea lack dynamism from midfield and herein lies the Lampard conundrum: they have envious depth and have spent big to give themselves the talent for competing in multiple competitions, but it still looks like they need a presence like West Ham's Declan Rice in midfield to really anchor things and give assuredness in the middle of the park. Rice is on their radar, but John McGinn, Aston Villa's outstanding midfielder, offered them a close look at what they're lacking.

Julien Laurens feels Timo Werner's performance at the weekend was one of the worst he has seen this season.

Lampard and Chelsea had every intention of turning this campaign into a title-challenge. But when form slumps -- they seem far removed from their November best, when they rattled off six straight wins in the Premier League and Champions League -- the pressure and noise increases around the squad and the players left out seem even more glaring in their absence.

Both Kai Havertz and Timo Werner were on the bench after underwhelming vs. Arsenal and neither made the necessary impact with 20 minutes left. Individual quality isn't enough for Chelsea at the moment as they struggle to create clear-cut chances. Tammy Abraham and Giroud are playing well and their overlapping fullbacks get plenty of crosses into the box, but they are either snaffled up at the near post and cleared or forced back to the midfield so Chelsea have to build again. How they must hope Hakim Ziyech is back sooner rather than later; until then, we're still waiting for this Chelsea side to be defined.

What are Chelsea at the moment? They're well-organised at the back, though Andreas Christensen looked shaky; solid but unspectacular in midfield; and then like a permanently coiled spring up front with that embarrassment of riches, but they lack general cohesion. Havertz, undoubtedly one of the best young players in the world, only has a goal and assist to his name this season. Werner last scored at the start of November and has zero in 11 now for Chelsea. Lampard needs to get the best out of these two.

Giroud was the scorer again on a day when Chelsea's attack seemed lacking in creativity and coherence. Darren Walsh/Chelsea FC via Getty Images

While you sense Chelsea are fast-tracking their identity, Villa wear theirs proudly on their chests. They are well-organised, work incredibly hard, press well and have flashes of brilliance. Anwar El Ghazi's fifth goal in five games was just reward for a good all-round performance, while Jack Grealish offers the flair to pair with McGinn's industry. McGinn was omnipresent and rattled Chelsea's bar with a howitzer of a shot, deserving of a goal after a sensational performance. They still need to get Ollie Watkins better service up front and that could come when Ross Barkley returns, but Smith judged Monday's game to perfection.

Smith said pre and post-match he's never seen a player "carried off with exhaustion," but what Villa are thriving off at the moment is collective trust in each other. "If they're doing well, I'll keep playing them," was Smith's post-match take. Compare that with Lampard and that's the problem at Chelsea: a few have stood up, like Chilwell and Pulisic, but he needs more from the collective whole, not just a smattering of individuals.

Until Lampard figures this out, Giroud simply cannot be allowed to leave. He was outstanding in last season's run-in, with six goals in the final nine league games, and he'll surely have a big part to play for Chelsea this season, but Lampard needs to get this impressive squad singing to his tune. Up next are Manchester City, if the game goes ahead.

While Chelsea were better than their defeat at Arsenal, we're still waiting for them to roar back. You sense the very two types of players they need at present were stood on the sidelines: Lampard and John Terry. Now it's up to Lampard to get this sizable ship back on course and heading in a winning direction.