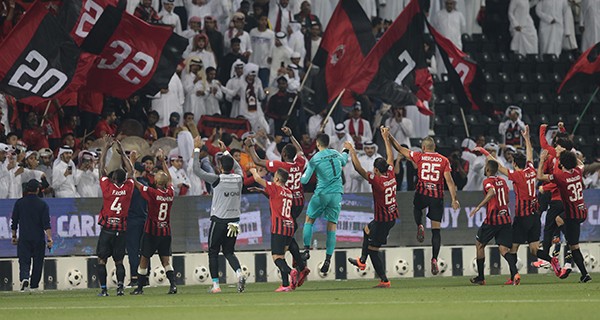 Doha, Qatar: Al Rayyan completed a double on Al Sadd with a 1-0 victory on Saturday and in the process all but ended their archrivals' Qatar Stars League title challenge.

Franck Kom scored the winner in the ninth minute and Rayyan defence manfully held on against Sadd's onslaught, especially at the start of the second half, for an invaluable victory.

Rayyan's victory means it will now be a two-horse race for the title, with Rayyan on 38 points, are four behind leaders Al Duhail who earlier defeated Al Sailiya 2-1.

Sadd remain third on 32 but with just five more games to go, they have little chance of catching the top two.

Xavi Hernandez's team, coming into the match after two straight draws and troubled by injuries, needed a positive start to steady themselves but Kom and Rayyan had other plans.

When Sadd conceded a freekick on their right flank just inside their area, there was no apparent danger on their goal. But Kom took the long diagonal freekick from Ahmed Maksoud on his chest and even though the momentum took him to an acute angle and Abdulkarim Hassan was closely marking him, he still managed to beat the defender and Saad Al Sheeb in Sadd goal with a powerful right-footed shot.

It was a beautiful goal, but Al Sheeb and Hassan would not be happy with their dealing with the situation.

While Baghdad Bounedjah and Akram Afif missed chances in the first half to equalise, it was Rayyan who had the better chances as captain Rodrigo Tabata rattled the crossbar with a delightful free-kick that had beaten Al Sheeb all ends up.

Tabata had hit the upright earlier in the game also while Yohan Boli also missed a sitter for Rayyan in the first half, firing his low shot wide after getting himself into a good position.

Sadd were all over Rayyan at the start of the second half with Pedro shooting wide in the 58th after being teed up by Afif. A couple of minutes later Hassan met Marco Fabian's corner with a towering header only for goalkeeper Fahad Younes to make a stunning save.

Bounedjah did put the ball in the Rayyan net with a header in the 67th, but the flag was already up for offside.
A few minutes later substitute Waad's shot flashed past the far post.

After weathering the storm, Rayyan grew in confidence and Al Sheeb momentarily kept Sadd in the game and the title hunt with two fine stops, including one with his foot, to deny Abdelaziz Hatem.
Sadd came close to equalising when Hashim Ali's intended cross hit the crossbar and bounced back into play, but it was definitely not Sadd's day.

And it increasingly looks it's not going to be their season either.