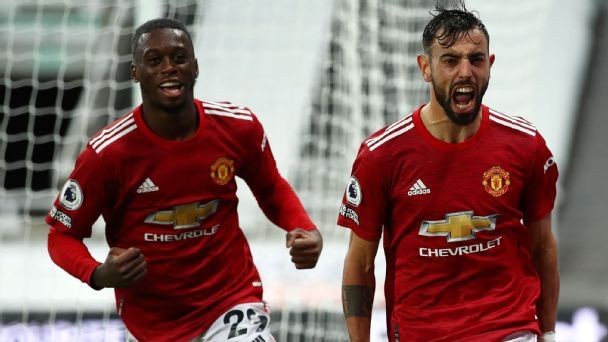 Bruno Fernandes made amends for a missed penalty with a late strike as Manchester United thrashed Newcastle United 4-1 on Saturday to collect their second Premier League win of the season.

Ole Gunnar Solskjaer's side got off to the worst possible start when the ball deflected off Luke Shaw for an own goal in the second minute, but United captain Harry Maguire put his side level from a corner in the 23rd minute.

"The boys came together really well. The are looking forward to every game. Today I rested a few and they have come on and done the business for us," Solskjaer said.

Rashford, Fernandes both 9/10 as Man United pour on the style late

Solskjaer made the surprise decision to leave Paul Pogba on the bench to start to match, saying that he had some back and hip issues following the international break.

Goalkeepers Karl Darlow and David de Gea were in top form. Spaniard de Gea pulled off a brilliant reflex save to deny Allan Saint-Maximin, while Darlow also made a string of fine saves at the other end.

The visitors should have gone ahead from the spot after Marcus Rashford was fouled, but again Darlow was up to the task, beating the spot kick from Fernandes away with his forearm.

"I want to put the ball more in the corner but it was not good enough. Congratulations to him to be first to save a penalty in the Premier League from me. That's 11 taken and one missed. Now people can say I can miss a penalty," Fernandes said.

However, the Newcastle goalkeeper appeared to be troubled by an injury to his left groin and Fernandes made no mistake four minutes from time, finishing off a superb flowing counter attack by lashing the ball into the top right corner to give his side the lead.

Newcastle crumbled in the final minutes as Aaron Wan-Bissaka stepped up to fire into the same top corner for his first senior goal in stoppage time, and Rashford added a fourth with a cleverly-timed run and cool finish to complete the rout.

Solskjaer lauded club captain Maguire who has seen some struggles for both club and country in recent weeks.

"Harry is a character, he has great resilience and wants to play. There is no hiding place and if you go away you prolong the criticism, He wanted to play and even though he wasn't 100% fit, he played well. He is a very well liked lad," added Solskjaer.

The win puts Manchester United 14th on six points, while Newcastle are 11th on seven points.