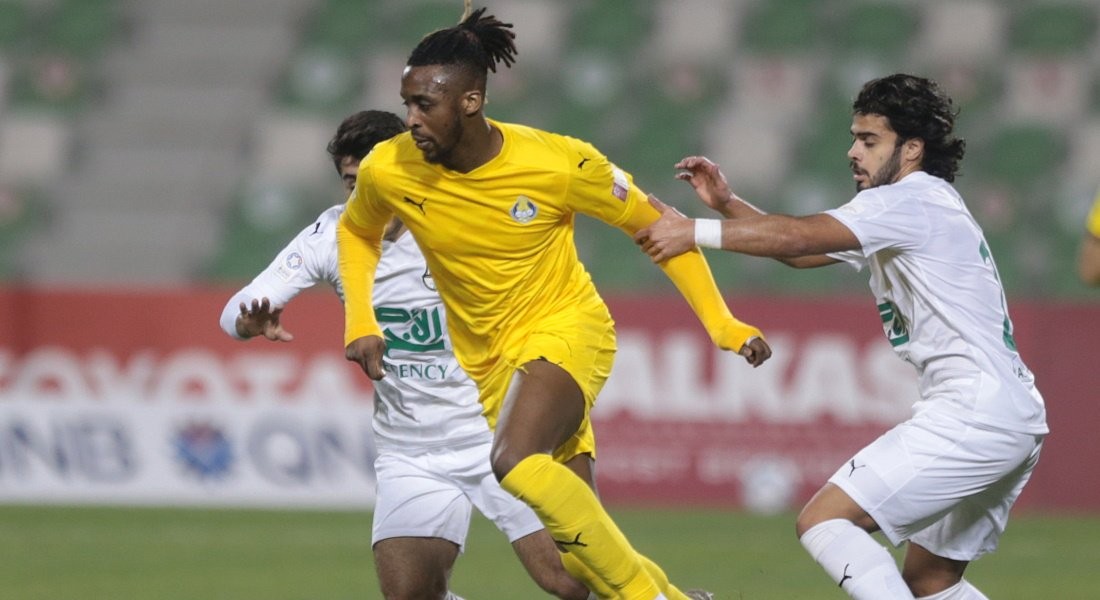 Al Gharafa had it easy against Al Ahli, winning 4-0, in Week 8 of the 2020-21 season QNB Stars League at the Al Ahli Stadium on Wednesday.

A double from Jonathan Kodjia (14th and 25th minutes), and a goal from Othman Al Yahri (35th) powered Al Gharafa to their sixth win of the season. Al Ahli’s Shane Lowry scored an own goal in the 52nd minute to add to The Cheetahs’ tally.

Al Gharafa leapfrogged Al Ahli to the second position with 18 points as the latter remained on 16 points after suffering their second defeat.

Al Sadd, who had beaten Al Wakrah 4-1 on Tuesday, continued to top the table with 22 points.

The Al Ahli vs Al Gharafa match got off to a fast start and in just the second minute, Al Ahli captain Omid Ebrahimi curled in a free-kick from distance, but it was slapped away by Al Gharafa keeper Salah Zakaria.

Al Gharafa opened the scoring after a keeper’s gaffe and alertness on Kodjia’s part. Al Ahli keeper Ivanildo Rodrigues jumped high to catch a loopy long cross from an Al Gharafa player on the flank. Rodrigues fumbled and dropped the ball next to Kodjia. The tall striker quickly smashed the ball into the top of the net.

Al Gharafa doubled their lead when Sofiane Hanni found Kodjia, stationed unmarked near the centre line, with a short pass. The Ivorian took off, outpacing Lowry and charged into the box. The Al Ahli keeper stepped away from his position, but Kodjia calmly slotted the ball into the net.

Al Gharafa made it 3-0 when skipper Moeid Hassan sneaked into Al Ahli box untested, but his shot from close range was blocked by the keeper. The ball cannoned off Rodrigues’ chest and went to an unmarked Al Yahri, who tapped the ball into the empty net. After a VAR referral to rule out offside, referee Abdulhadi Al Ruaile allowed the goal to stay.

Al Gharafa then benefited from another Al Ahi mistake when Lowry, in an effort to block a cross from Al Yahri, deflected the ball into his own net.

Six minutes from the final whistle, Al Gharafa’s Adlene Guedioura fired a bullet a couple of yards away from the box, but his shot narrowly missed the Al Ahli crossbar.