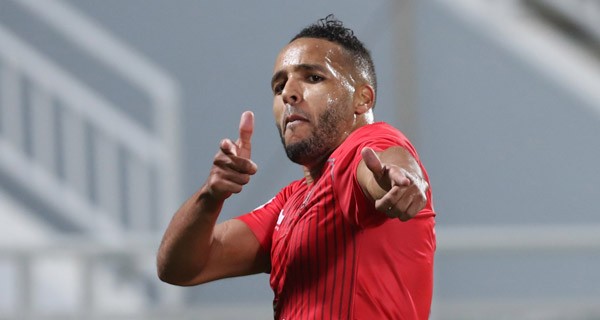 Doha, Qatar: Al Duhail SC striker Youssef El Arabi, will not finish as the top scorer this season and his team might not win the title this season, but the Moroccan says the Red Knights will not let Sadd seal the title in their stadium when the two heavyweights meet on Saturday.

Sadd can take an unassailable lead of seven points with a victory on Saturday and El Arabi said Duhail would not let that happen.

“We know the importance of this match. We are still defending the title and we will not allow Sadd to win the title in our stadium,” said El Arabi, who for once is third in the scoring charts with 21 goals, behind Al Sadd’s record-breaking Algerian Baghdad Bounedjah who is on 35 and his strike partner Akram Afif with 23.

El Arabi said he has enjoyed the competition with Bounedjah.

“I am very happy with the level presented by Baghdad Bungah with Al Sadd and his high scoring abilities. The competition between us has been burning in the last two seasons, but now he has broken the record.”

But El Arabi is not yet ready to concede the league title to Sadd.

“Everyone knows the power of the Al Sadd, but for me, our match on Saturday is like the final. I believe Duhail are capable of beating Sadd, especially because the game is in our stadium, and it’s our last chance to defend the title.”

Duhail coach Rui Faria said they want to beat Sadd which will reduce the deficit to just one point.

“We know exactly how important this match is and how strong Al Sadd are. We need a win to have any chance of defending our title.

"Sadd have two chances, either a draw or a win, but we have one chance to keep the league title," he said. "I've been working with my team since last January and I know what my players can do.”